How Microsoft Vanquished Bureaucracy With Agile by Steve Denning

January 17, 2020
Microsoft has rapidly rising revenues and today is the most valuable firm on the planet—worth more than a trillion dollars.
In 2004, I would never have predicted this. At the time, I was visiting Microsoft for a short consultancy. I was shocked to find how bureaucratic it was. After working for several decades in another notorious bureaucracy, I knew the problems bureaucracy caused. But Microsoft was worse: it was impossible to get decisions from within a labyrinth of silos and layers that called to mind Kafka’s The Castle.
What can other big old firms learn from Microsoft’s escape from bureaucratic strangulation?
According to The Economist, the reason for Microsoft’s turnaround is that Satya Nadella, the CEO since 2014, took the bold decisions of a heroic leader. He opted not to rely on the existing business (Windows) and chose not to be “rapacious.”
The more important lesson for most big old corporations, though, is not so much the individual decisions of a heroic leader, but rather how Microsoft as an organization overcame the disease of bureaucracy. By the time Nadella became CEO, Microsoft had already embraced Agile and was ready to implement his bold decisions. 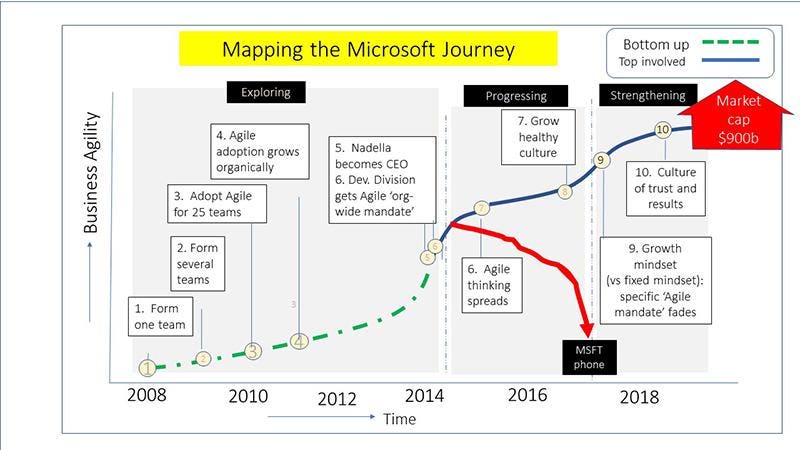 The Decisions Of The Heroic Leader
According to The Economist, Microsoft’s triumph lies in decisions taken by Satya Nadella:
PROMOTED

Microsoft missed social networks and smartphones because of its obsession with Windows, the operating system that was its main money-spinner. One of Mr Nadella’s most important acts after taking the helm was to de-prioritize Windows. More important, he also bet big on the “cloud”—just as firms started getting comfortable with renting computing power.”

Second, Nadella shifted away from “rapaciousness.”

Mr Nadella has changed Microsoft’s culture as well as its technological focus. The cult of Windows ordained that customers and partners be squeezed and rivals dispatched, often by questionable means, which led to the antitrust showdown… [Instead] work with regulators rather than try to outwit or overwhelm them.”

Breaking From Bureaucracy: Microsoft’s Agile Journey
The bold decisions that Nadella took were good decisions, but they would have had little effect if Microsoft had not been ready to implement them. An Agile transformation process had been underway for some years.

Popular posts from this blog

SCRUM- Who should write a user story

December 24, 2011
Traditionally user stories (or requirements) were written by Business analysts. They used to prepare big documents after months of study. It was a herculean task. I used to get such UI/Functional specification documents. I have fixed a lot of bugs because I missed few text in such 1000 + pages document. This is not the only interesting part. Some of the requirements were so weird that I often wondered why I am creating the features which no one is going to use. If I had the option I would have recommended a better option. If the BA’s misunderstood some requirements & customers failed to correct those few words in the epic requirement then we will have a nice situation. In the agile world the story is different. Product Owners are primarily responsible for user stories. But can anyone else also contribute? Yes. Definitely yes In actual environment many users write user stories. The first requirement may come from end user. The PO, tech architect, scrum master, BA’s... anyone can up
2 comments
Read more

PDCA & SCRUM (or Agile); Why is it important?

May 26, 2012
The PDCA (Plan DO Check Act) cycle was made popular by Dr. W. Edwards Deming. This is a scientific cyclic process which can be used to improve the process (or product). This is cyclic in nature and usually time boxed. Plan  This is the first stage of the process. During this step the team discusses the objectives, the process and the clear conditions of exit (conditions of acceptance). This stage sets the measurable and achievable goals for the team. DO Team works together to achieve the objective set in the planning phase. Team works with the set of agreed process. Check Once the implantation is done team regroups and verifies the output and compares it to the agreed conditions of acceptance decided during the planning phase. The deviation, if any, is noted down. ACT If any deviation in planned tasks is observed during the Check stage, a root cause analysis is conducted. Team brainstorms and identifies the changes required to prevent such deviations in future. Team also
Post a Comment
Read more

What are the rules of scrum?

August 28, 2012
A relatively new person to scrum asked me this question last day. My answer to that person was yes. But really does the scrum have any rules? Scrum is a framework which helps us in developing software. It has very few rules and apart from those basic rules rest of them are guidelines like best practices. Some of the rules  The roles of Scrum • Scrum Master -  http://www.theagileschool.com/2012/03/scrummasters-checklist-roles.html • Product Owner • Feature Team The PDCA cycle ( http://www.theagileschool.com/2012/05/pdca-scrum-or-agile-why-is-it-important.html  )  frequent communication about risks (daily) • Plan – Sprint planning • Do – Actual engineering sprint – deliver a potential shippable code • Check – Sprint review • Act – Retrospective  The scrum guide @ http://www.scrum.org/Scrum-Guides will be a good guideline for teams/companies planning to start scrum. If you are following the recommendation in these then you are following scrum. Apart from these rest of
Post a Comment
Read more