Role and responsibilities of QA/tester in scrum/Agile world; How Agile improves the testing of software. 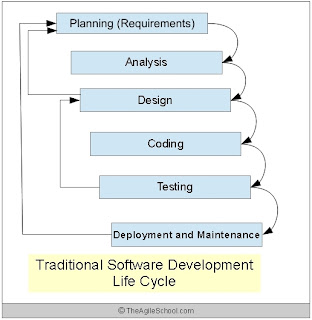 In traditional software development model QA/testers were actively involved in only certain phases of the project. After development finishes the coding the entire project was handed over to QA. In many cases QA and developer wouldn’t even know each other. All the communication will be through email or bug tracking system. I remember one instance when my project manager relocated the entire QA team to another building!!! He didn’t want the QA and development team to communicate face to face. We had different competency centers for QA and development teams with different career objectives and career ladder.   The QA team had a separate identity, a feeling of ownership over an entire phase of product. They were called the gatekeepers of quality.


But in scrum apart from the sprint cycles there are no definite phases. In scrum there is a big change in the way team operates and interacts. In scrum there is no differentiation between a QA and developer. Scrum just treats them as two separate individuals with specialized skills who work together to deliver a quality product after the sprint.

In scrum QA and developer are part of the same team and collocated (mostly). This helps in a better communication and team bonding.  They learn from each other. More focus is given to communication and knowledge sharing.

Many say that in scrum there is no place for QA/testers. This is not reality. We still need QA; not the old QA but the smart agile QA. It’s not about the number of bugs anymore. It is all about the quality of application which is delivered to the customer.

A much bigger role


A tester in agile world has a much bigger role to play. He has to wear multiple hats and every day the old beliefs and practices will be challenged. Don’t oppose it, embrace the change, It is for good. A QA in no longer limited to writing test cases and creating bugs in bug tracking system.

Some Additional roles and responsibilities.

Be an expert in the application domain. Testers should help the team and PO write COA’s for user stories. Testers should be able to challenge the existing COA’s and propose a better one. Help the team learn some industry standards like Gherkin for COA’s.

Pair with other team members to discuss the PBI or bugs. Don’t expect the developers to fix a bug or finish a PBI and then provide a build to test. Don’t create a mini waterfall in sprints.
Developers are poor testers; help them to improve the testing skills. With the close interaction of testers, the unit testing will be improved. If the build is delayed, pair with the developer and test the fix in dev. machine. If you find any issues, later on it will save a lot of time in writing and explaining the new bug.


When team starts a new feature development, a tester can wear the customer hat and create acceptance test cases. I have seen in few projects where a new feature was introduced in release cycle and another PBI/bug was created to remove that on next release cycle!!!.  A proper understanding of the customer requirement would have prevented this situation (PO and other stakeholders should have handled this but that’s another level of discussion)


In big products multiple teams work on same products which are in turn linked to many other dependent products. I have seen few cases where the lack of cross product knowledge in teams has caused serious problems and issues. Testers can take this role of designing the features across the suite. If a feature was proposed for X product does it makes sense to move that to Y for a better customer satisfaction?


Ask questions about the quality of the application. What is the test coverage of the features? Are there any performance issues? If the product has issues, then the QA engineers should always bring this to Product Owners and Scrum Masters attention. Work with them closely to reduce this technical debt.

The manual testing should be less than 10 % of the total testing.If the team is spending more than that then testers should learn any automation tools to automate the test cases. Without automation the life will be miserable. There is no value in doing the repeated work day after day. By automating the test cases the velocity of the team will increase drastically.


All the bugs cannot be found by automation tool. Always be ready to do exploratory testing with the new interfaces and products.  The unique skills of the QA will help the team to find and fix hidden bugs. If there is a pattern in these bugs, update the unit test cases or automation scripts.
In short a tester in an agile world is much powerful. A tester needs a change in identity – need a change in mindset to release software with a high quality each sprint. There is no glory in creating bugs in tracking system. Only thing which matters is zero defects with customer (if you can).There are no we testers and you developers.


Get in touch
Are you a tester /QA in agile world? Write to me about your challenges and your experience. I would love to hear from you. .

Popular posts from this blog

PDCA & SCRUM (or Agile); Why is it important?

May 26, 2012
The PDCA (Plan DO Check Act) cycle was made popular by Dr. W. Edwards Deming. This is a scientific cyclic process which can be used to improve the process (or product). This is cyclic in nature and usually time boxed. Plan  This is the first stage of the process. During this step the team discusses the objectives, the process and the clear conditions of exit (conditions of acceptance). This stage sets the measurable and achievable goals for the team. DO Team works together to achieve the objective set in the planning phase. Team works with the set of agreed process. Check Once the implantation is done team regroups and verifies the output and compares it to the agreed conditions of acceptance decided during the planning phase. The deviation, if any, is noted down. ACT If any deviation in planned tasks is observed during the Check stage, a root cause analysis is conducted. Team brainstorms and identifies the changes required to prevent such deviations in future. Team also
Post a Comment
Read more

Product Backlog: Should you write everything in user story format?

February 18, 2020
I like user stories a lot. They help everyone talk the same language and results in a better product. User story alone does not constitute product requirement. User story is supposed to be a place holder for discussion which should happen between the team, Product Owner and the customer. This discussion result in a common understanding which along with the user story content is the product requirement. This format captures the essence of requirement without confusing the readers User Story is only one of the many different ways in which requirements can be represented. This is not mandatory in any Agile “process”. But many have made this mandatory. I have seen many spending countless hours trying to write the requirements in user story format when they could have easily written that in simple one-line sentence in few minutes.   I have seen team members refusing to even discuss the requirement until product owner rewrote the requirement in user story format. Once I
Post a Comment
Read more

March 05, 2020
Agile teams work in iterations. During this period, they are supposed to work on product increments which can be “delivered” at the end of iteration. But how you know that the correct product was delivered? Many teams have different kinds of acceptance criteria and Definition of Done (DoD). But in many cases, this “done” is not the real “done” there might be some testing pending, some integration or review pending or anything else which prevents the actual use of the product increment. Many of these teams will need additional iterations to finish hardening their products. Many teams will implement different types of “gates” or approval steps to move to next stage. The free flow of product will be interrupted. They might end up doing mini waterfall within their agile process. Many don’t even realize this. This results in poor quality and requires additional effort to “harden” the product. Potentially Shippable Product increment The acceptance criteria and DoD should be modified
Post a Comment
Read more